If it’s up to Bert de Doelder, the subsurface storage of water in Rotterdam will be given wide scope. De Doelder, a groundwater specialist at the municipality, is pretty proud that his city is the first one in the Netherlands to seek solutions to flooding and drought issues deep under the surface. ‘It is a huge challenge to increasingly refine the system as we build up experience.’

No discharge via the sewers

The COASTAR programme provides exactly what a manager like the municipality of Rotterdam is looking for. De Doelder: ‘It’s mainly about our need to acquire more and more knowledge about subsurface water storage, because in 2050 our city does not want to discharge any more rainwater via its sewers. Above-ground solutions take up too much space. That’s why we’ve decided to infiltrate the water.’

Under the ‘Urban Waterbuffer’ rubric, subsurface storage is to be implemented at several locations in the city. The first implementation was carried out last year under the Sparta stadium, where rainwater is being harvested in a specially constructed system. The collected water is directed through a sand filter, to remove fine particles, and then stored at a depth of about 25 meters. In times of drought the football club draws from the installed water reserve to water the playing pitch.  ‘A beautiful circular system,’ says De Doelder.

Teun van Dooren, researcher at the KWR Water Research Institute, knows that an average of about 16 million litres of rainwater can be stored annually in the subsurface at the Sparta stadium. But you can’t install a subsurface water storage system of this kind anywhere in the city, and certain preconditions need to be met for it to operate successfully. ‘To begin with, there must be a balance between the water demand and the supply,’ explains the hydrogeologist. ‘Specific requirements must be satisfied, both with regard to the water’s quantity as well as its quality.  Moreover, the soil characteristics must be right – which is the case in Rotterdam. A thick clay layer extends to a depth of about 17 meters, followed by an underlying sand layer of about 10 meters, where the water can be stored.’

The amount of water you can store in the subsurface depends among other things on the effects the operation has. Van Dooren: ‘When you infiltrate water into the subsurface, the groundwater pressure increases. If this pressure becomes too high, it can lead to a bursting of the clay layer. The abstraction of the water also has its limits. If it causes the local groundwater level to drop too much, land subsidence can occur. Of course, the quality of the water is a constant focus of attention, since we want to be able to recover and reuse it. This is therefore something that needs to be constantly monitored during operations, so that you know what’s going on.’

Digital finger on the pulse

The lessons we’re learning thanks to COASTAR about the subsurface storage of water in cities relate primarily to the close monitoring of the effects. Ultimately, we should have a dashboard – a kind of digital finger on the pulse – which among other things would give the managers a better understanding of the impact on the groundwater level and quality and enable them to signal risks of well clogging in a timely manner. A graphic interface of this kind should make it possible for several systems to function effectively and concurrently in the urban environment. ‘At Sparta we subcontracted the management and maintenance,’ notes De Doelder. ‘But now that we are moving towards several applications, we must naturally also, as a municipality, have that expertise in-house. With the data we are now collecting we are trying to make the installations even smarter, and in this COASTAR provides a huge added value.’

From roof to pump

The next subsurface water storage system in Rotterdam is to be installed in the Robert Fruinstraat, a street where the residents are strongly motivated to participate in the project’s thinking and implementation, says De Doelder. ‘We will be putting the rainwater that falls on the roofs of their houses underground, rather than discharging it into the sewers. The subsurface storage will create a freshwater reserve under the street. Eventually, a hand-pump will be installed, which passers-by can use to extract a small amount of water from the reserve. To me, this is a perfect solution.’ 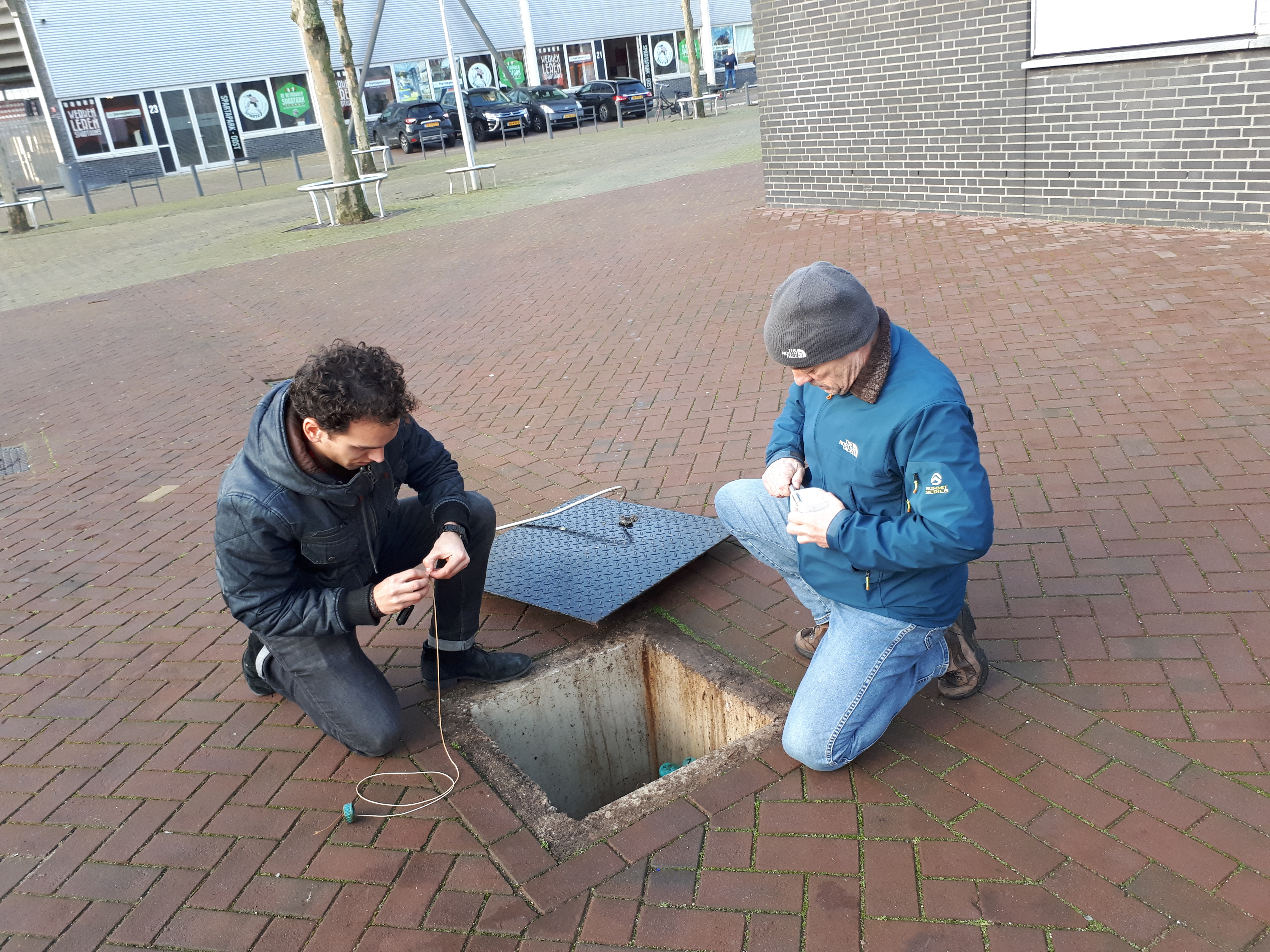 Bert de Doelder and Teun van Dooren recover data from a groundwater data logger at the Urban Waterbuffer in Spangen. The rainwater infiltration and abstraction are continuously monitored.

Cities2Recharge in Rotterdam is one of the four locations where COASTAR is researching how the subsurface can be smartly used for a large-scale freshwater provision. For more information, please click here.